New York, 21 July 2021 (dpa/MIA) – Amazon founder and world’s richest man Jeff Bezos was the first to step out of his freshly landed capsule on Tuesday with a cowboy hat and thumb’s up after successfully reaching space on the New Shepard spacecraft developed by his company Blue Origin.

“My expectations were high and they were dramatically exceeded,” Bezos said at a press conference afterwards. He also thanked all Amazon customers and employees – “because you guys paid for all this.”

Bezos, 57, was joined by his brother Mark as well as the oldest person to ever go to space, 82-year-old former pilot Wally Funk, and the youngest, 18-year-old Oliver Daemen.

Funk threw up her hands as she exited the capsule, while Daemen hugged his father, a Dutch investment banker, and said he hoped more people could experience what it was like to see the Earth from above.

Bezos and other entrepreneurs including British billionaire Richard Branson want to open up a market in space tourism, selling the trip on the experience of zero gravity and the spectacular views of Earth. 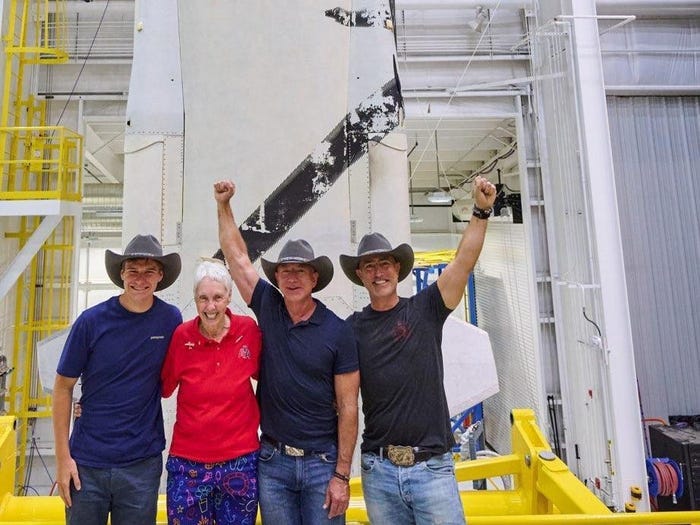 The New Shepard went over 100 kilometres above the Earth, over the Karman Line space boundary. This is considerably higher than the Virgin Galactic flight that took Branson into space nine days ago.

The reusable booster rocket that propelled the passengers to the edge of space detached and landed safely back down on the ground.

After detaching and reaching its top altitude, the New Shepard sank back down with a parachute and landed on the ground minutes later.

In total, the trip took about 10 minutes.

The father of teenager Daemen, Joes Daemen, had taken part in the auction for the fourth seat to space in June but was outbid.

However, the anonymous winner of the auction, who bid 28 million dollars, could not take part in the launch due to a “scheduling conflict.” It has not been disclosed how much Daemen had to pay.

In the 1960s, Funk was part of a group of female aviators that became known as the Mercury 13. They trained to become astronauts, although they were not officially part of a NASA programme. None of the women made it into space. The previous oldest person to fly into space was John Glenn, who was 77 when he went aboard the space shuttle in 1998.

The launch date is symbolic, taking place exactly 52 years since the first moon landing, as is the name of the spacecraft, named after the first American in space, Alan Shepard.

Bezos, who founded the Blue Origin space company about two decades ago, has been heavily criticized for his space tourism ambitions by people who charge that it’s a selfish waste of money with no regard for the climate and largely devoid of scientific research interests.

Bezos’ flight comes after Branson became on July 11 the first billionaire to leave Earth on a spacecraft he funded.

Branson, who founded Virgin Galactic, which competes with Blue Origin in the burgeoning market for space tourism, congratulated Bezos on Twitter on Tuesday: “Impressive! Very best to all the crew from me and all the team at Virgin Galactic.”

Mickoski: Go out and put an end to abuse and divisions

Erdogan climbs down from threat to expel 10 Western ambassadors

Back to top button
Close
Close